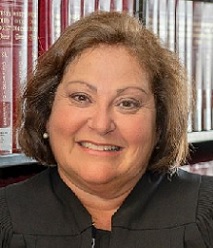 Judge Heather Stein Russell is a graduate of Walnut Hills High, Miami University, and the UC College of Law, where she was an Urban Morgan Fellow.  She and her husband have lived in Loveland since 1986, where they raised their two grown sons, and were avid high school baseball and basketball parents, and college baseball parents.

Judge Russell brings a great depth of trial experience to the bench.  She was an Assistant Hamilton County Prosecuting Attorney  from 1984-2001, where she prosecuted cases in Juvenile and  Municipal Courts, and in Common Pleas Court, where she prosecuted over 1700 felonies, and 6 of the most complex murder trials in the State of Ohio.  She was the first female team leader in the Major Trials division.  One of her most famous cases involved a woman who had a mental health condition which caused her to pass out when she heard sexually charged words.  A neighbor purposefully caused her to pass out, and then raped her.  When she came to, she reported the rape, and each time that she had to describe the rape for the police or jury, she passed out.  CNN televised highlights of this case on their worldwide news service, and the tv series L.A. Law used the cases as a basis for an episode.  It was a Chanel 9 news story of the year.  Judge Russell has served as special prosecutor in Adams and Preble counties.  As a prosecutor, Judge Russell earned an instructor’s certificate from the Ohio Peace Officers’ Training Academy (OPOTA) and has instructed at the Cincinnati Police Academy, Hamilton County Police Association, UC School of Social Work and Continuing Education, and Tri Health in the areas of domestic violence prosecution, homicide investigations and emergency room protocol for sexual assault.  She has also instructed at the Citizens’ Police Academies for Loveland, Forest Park, Wyoming, Springdale and the Hamilton County Sheriff’s Department.

In 1999 Judge Russell won her election to the Loveland City Council, and she was also appointed as Chief Assistant Prosecuting Attorney of the Hamilton County Grand Jury, where she supervised all felony and misdemeanor indictments in Hamilton County, civil and criminal issues, the victim advocate program, and the county’s Diversion program.  She held those 2 positions until she was elected to the Hamilton County Municipal Court in 2001, and has served on the bench continuously since that time. Her colleagues have twice elected her as Presiding and Administrative Judge, and she has also served as Chair of the Personnel, Probation and Trial Lawyers’ Committees.

She has presided over the Mental Health docket, and is currently presiding over CHANGE Court, a developing specialty docket for victims of human trafficking.

2019 recipient of the Ohio Victims of Crime Services' Model of Justice Award."