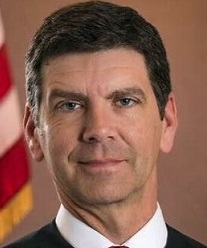 Judge Curt Kissinger was appointed to Hamilton County’s Municipal Court, District 4, in February 2015 and elected to retain the seat in November 2015.  As a Judge, Curt Kissinger brings to the Court 25-years of courtroom experience as a prosecutor, civil and criminal litigation attorney and, most recently, Administrator of the Hamilton County Juvenile Court.

Judge Kissinger began his legal career as an Assistant Hamilton County Prosecutor in the criminal trial division.  He was responsible for the prosecution of felony and misdemeanor offenses in Common Pleas and Municipal Court.

Curt Kissinger was appointed to serve as a special prosecuting attorney for the Ohio Organized Crime Commission, a multi-unit federal and state law enforcement task force created by the Ohio Attorney General to prosecute white collar and organized crime in Southwest Ohio.

In December 2011, Curt Kissinger became the Administrator of the Hamilton County Juvenile Court.  As Administrator, Judge Kissinger supervised all aspects of court operations overseeing 289 employees, including 20 magistrates, the Court’s 160-bed secure detention center, and an annual operating budget of $25 million dollars.  He also served as a magistrate for the Court as needed.

As Court Administrator, Judge Kissinger implemented the private/public partnership to maintain the operation of Hillcrest Training School to preserve locally-based treatment options for youth and families.  He also collaborated with the Ohio Supreme Court to complete the first case management review of the Juvenile Court.

Judge Curt Kissinger is an Educator

As an Adjunct Professor at the University of Cincinnati’s Blue Ash Campus, Judge Kissinger is an instructor in the Behavioral Sciences Department.  He teaches in the subject areas of criminal justice and corrections.

Judge Curt Kissinger in the Community

Professionally, Judge Kissinger was a member of the Hamilton County Ethics Commission.  He has also served on the Board of Directors of HOPE for Children and Families, Journey to Successful Living, and Ohio Family and Children First.